For those of you that aren’t really savvy of the latest Netflix hits – Narcos is sure one of them. This is a series about the drug empires of Escobar, the Cali Cartel, and, most recently, Miguel Ángel Félix Gallard. It’s a vastly popular series and people from all over the world are huge fans of it. Well, NetEnt has decided to take matters in its own hands and create Narcos, the slot game. This is the official, licensed slot game for the Narcos series. 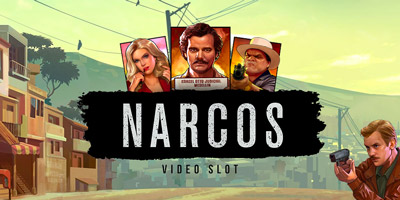 If you have seen Narcos, then you will recognize the heroes and villains of the first two seasons. This is the notorious drug kingpin of Columbia, Pablo Escobar, himself. Then there are the detectives Murphy and Pena. You will also see various other characters that the series is known about. Of course, the scope of this game is limited to the first two seasons only. It means that you won’t see any characters from the third and fourth seasons – Pacho, Chepe, Felix, Neto – are all off limits.

But the game does a pretty decent job of transferring the world of Narcos into a slot. So, if you’re a fan of the series, then you will likely love the theme of this game. The graphics and technology in new slots like Narcos really take the gaming experience to a new level. The evolution of casino gaming is in constant progress and in new casinos 2021, you will start to see even bigger improvements.

The features of Narcos

NetEnt has installed a handful of features into this game. Basically, the game has 5 reels and 3 rows. There are 243 pay lines in total – which you can bet on. The first of the special features goes by the name of “drive by”. It happens randomly that gang cars come in the background and start shooting over the reels. During this, some of the high-value symbols will turn into wilds. And you will make bigger winning combinations with the help of the drive by.

Then there’s the good old feature of walking wilds. Every wild that comes out on the reels (in the form of a police badge) will move to the left. And the same wild will continue to be on the screen until it moves to the leftmost and leaves. This too will help you string together multiple big wins.

Get three of the locked up symbols of Pablo and you will get a certain win. Depending on your luck, it can be a smaller or a bigger win. Finally, you can activate free spins. During this feature, there will be shootouts. And again, the high value symbols will turn into wilds that will then leave the screen gradually. So, as you can see, Narcos is a game that has some unique and exciting features to look forward to.

We can comfortably say that Narcos the slot game by NetEnt is not as fun as the series. However, it does pack a powerful punch. And the atmosphere is similar enough to that of the show to merit a definite play through for the truest fans. We hope that you will enjoy it yourself. So, what will you decide? Plata… or plomo?